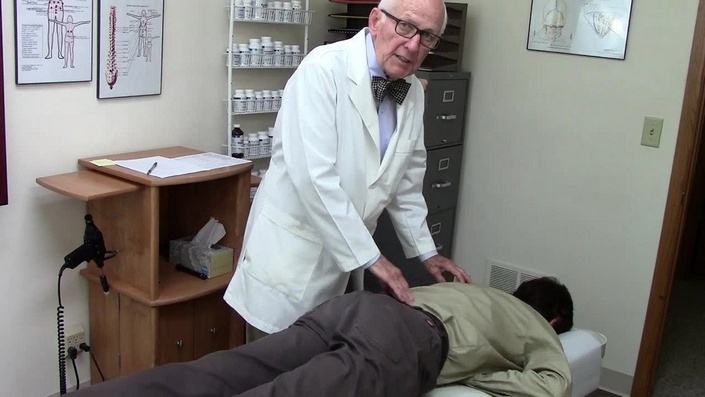 Watch the video and then enroll to find out how to make adjustments easier.

This Course presents even more information concerning how to benefit your patient.

Dr. B.J. Palmer coined the phrase “From Above Down - Inside Out”. His statement reflected his belief that the body’s controlling energy came from what he called Innate,the energy was used Inside the body and then dispersed Out.

Albert Einstein along with the statement “Everything is Energy” said “Energy cannot be destroyed it can be changed.” When energy enters the body through nutrition, breathing, Sun absorption, Etc. It is used by the Intelligent Autonomic Mind to maintain life. Using the energy changes the frequencies so it can no longer be used by the body. The changed energy is then expelled through the excretory systems including the the large intestine, urinary system, skin, breathing, etc.

The medical profession discovered relying just on the excretory systems to expel used energy does not work well healing. The medical profession previously kept patients in bed for periods of two to three weeks during what they considered the healing process. They found that people that got up and moved around healed faster than people that stayed in bed. This demonstrated that used frequency is also dissipated through articulation motion.

The spine has 139 articulations which makes it paramount in expelling changed frequencies through articulation motion.

The spinal subluxation has become the primary vehicle for Chiropractic care. Following the Palmer’s supposition that adjusting the spine was affecting the nervous system, the chiropractic profession placed greater research emphasis on methods of spinal adjustment rather than reason for the spinal involvement. The scientific community has agreed through various studies that spinal manipulation has an effect on spinal health, but the scientific community has never been able to determine why spinal manipulation has an effect on the health of the patient.

Chiropractic research emphasis has been on the spine and has not researched why the spinal involvement exists. In this State Energy Remedy® Course #6 titled Spinal Motor Units is an explanation why the spinal involvement exists and why it is so important to chiropractic. The course presents a more specific application of the disease - spine association which relieves symptoms and conditions resulting in immediate reduction or complete reduction.

I’m Ron Masters, D.C. I am here to teach you how to be more than an instant alternative to opiods for pain. I practiced 30 years pretty much the way I learned in college, spinal adjustments. I had a good practice, and then it dawned on me it isn’t the spine, it’s the energy in the spine. The energy that runs the body is not just in the spine it is the very thing that life is made of, and every cell in the body relies on it.

I know what your thinking, Ron you were taught that in chiropractic college. My answer, I know I was, and I’m grateful, but what I wasn’t taught is how to approach disease on an energy level. I was taught how to approach disease on a spinal level, and that is what I did. It worked much of the time, but not all of the time and many times it wasn’t repeatable with other patients or even with the same patient at a later visit.

I realized when I approach disease conditions on an energy level it works all of the time and is repeatable. I can’t give a person who is about to go on opiods confidence that I can stop them from having or feeling their pain by treating them on the spinal level, which is powerful but not enough. I can and do give a person in pain confidence that their pain can be stopped because it is stopped while they are in my office and beyond when I treat the crippling frequency causing the pain.

Each cell needs two things to exist, one is nutrition supplied by blood, and the other is a specific frequency to guide the activities of the cell. Frequencies that insult the cell are the cause of all disease conditions. I am here to teach you how to stop the insulting frequencies which require more than adjusting the spine or moving energy with acupuncture. I am not here to say adjustments and acupuncture don’t work, they do. I have found what is taught in these courses works much better and is repeatable. The patient doesn’t have to wait to see if the treatment is successful, they feel it before they leave your office.

When does the course start and finish?
The course starts now and never ends! It is a completely self-paced online course - you decide when you start and when you finish.
How long do I have access to the course?
How does lifetime access sound? After enrolling, you have unlimited access to this course for as long as you like - across any and all devices you own.
What if I am unhappy with the course?
We would never want you to be unhappy! If you are unsatisfied with your purchase, contact us in the first 30 days and we will give you a full refund.
off original price!